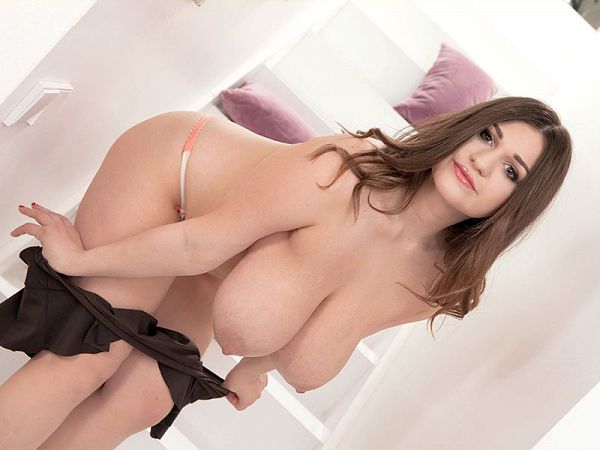 Demmy Blaze was a waitress. "I wore a tight T-shirt and, of course, I got much attention. I have a small waist and big boobs. I think it is beautiful."

So Demmy walks into a Brazerie shop to buy some bras. She walked out with an assignment to model bras for the company.

"My breasts started to get very big when I was 15 and I was the biggest of all my girlfriends," said Demmy. "When I was 15, I had DD-cups." Now Demmy is an H-cup. You can see why Brazerie hired her.

Demmy became a webcam model for the extra income. We tried to interest her in posing for SCORE and that took some time, almost a year. It didn't surprise me. It never does. SCORE is not known or sold in Ukraine, Russia and other eastern European countries and she didn't know a thing about us.

"I like to wear two-piece suits at the beach. If I'm going to a night club in Odessa, I like to wear tight clothing to show off my figure. Sometimes people think I am a famous person. In the summer, I like to go to nude beaches to take some nude photos for myself. There is no need to be shy because everyone else is naked too. And, of course, I go to nude beaches to sunbathe so I don't have white lines on my body."

Demmy was originally photographed in Prague where we have several satellite studios. "I enjoy how I look in the SCORE pics and videos. They were nice people, professional. It took me time to decide when SCORE contacted me. I'm glad I did it. "

Demmy's own favorite models include Sha Rizel, Hitomi and Alexya. When she told me that, it was well before the movie On Location North Coast was set up. That week in the Dominican Republic, Demmy got to meet, shoot and live with two of those great girls, Sha and Alexya. She became very good friends with Sha and they even went to Bali together later on. One other thing. Demmy went fully nude in the Dominican Republic.

Demmy doesn't have a molecule of meanness in her eye-popping rack but she did pull an April Fool's joke that jolted me by announcing that she was getting a breast reduction. Reading that was like being hit in the face by a wet towel until she said she was joking.