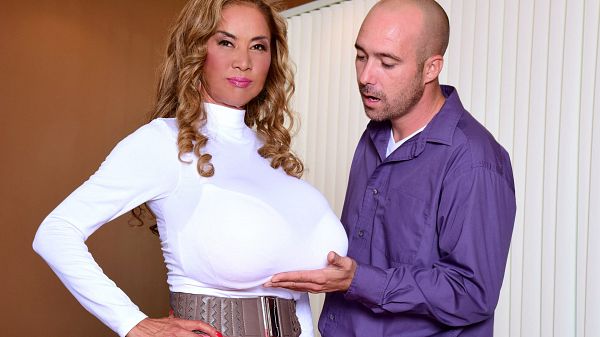 When this scene opens, the great Minka, the world's bustiest Asian by far, is standing at a copy machine in an office. She's wearing a white sweater that's absolutely tenting. I mean, her tits look even more ginormous than ever. Her boss walks past.

Figures that Minka would have a boss named Dick.

Well, Mr. Dick is so distracted by Minka's tits that he pours coffee all over the floor. Minka is not surprised. This sort of thing happens to her all the time.

Next time he shows up, Minka is sitting at her desk with her sweater up around her neck and her huge tits pouring out of her bra.

"What's wrong with your shirt?" he says.

He calls her into his office. Tells her that she can't be walking around the office with her tits out.

"Why are you grabbing your dick?" she asks him, tit-for-tat.

"You need to fuck and your stress is gone," she advises helpfully.

And that's how Minka avoids getting reprimanded. Once again, her tits save the day.

Minka has filmed many pictorials and videos for SCORE magazine since 1994. She has been featured on numerous radio and television shows all over the world. Her fan base covers the globe, from Japan to South America. She's been going strong for 25 years, and the only reason she's not in the Big-Boobs Hall of Fame is because she's never retired.

I hope she never does. She's more valuable out here than she is in there.

See More of Minka at SCORELAND2.COM!