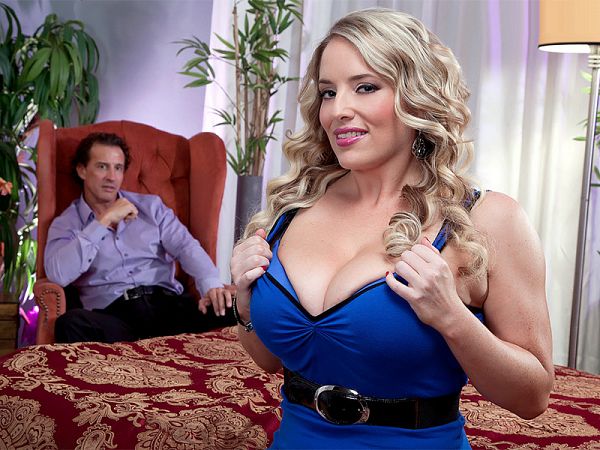 Maggie Green looks directly into the camera and starts talking dirty, which she got better and better at as she gained experienced. Tony DeSergio sits behind her and listens then comes over and begins to fuck the shit out of her, eventually jerking into her mouth.

Maybe this is no big deal for a guy who watches tons of hardcore but it was for me. We tried for a long time to photograph Maggie just to get pictures of her naked tits.

Originally, Maggie only modeled wearing tight tank tops and tight jeans on a popular sports blogger's site, "Sports By Brooks." That's where I first saw her photos. When Maggie finally agreed to shoot for SCORE, she would do only basic nudity, no spreading.

"I helped put the cock in Angela's pussy!" Maggie said. "That was fun. I liked doing that. I don't know why. It felt dirty, putting somebody's cock in another chick's pussy."

In a separate scene, the same stud tit-fucked her and nutted her chest. But no fucking.

"I've watched a lot of porn," Maggie said during one of our interviews. "I was a big fan of Jenna Jameson. Still am. I always thought it was hot and I was always curious...like, 'What would that be like?' And then I did my first girl-girl scene. I liked that. I like girls. And I like cock much more than I like girls, and you get older and you don't want to wait too long before you try something, and I'm the kind of person who doesn't regret stuff when I do it. I regret when I don't try something I'm curious about."