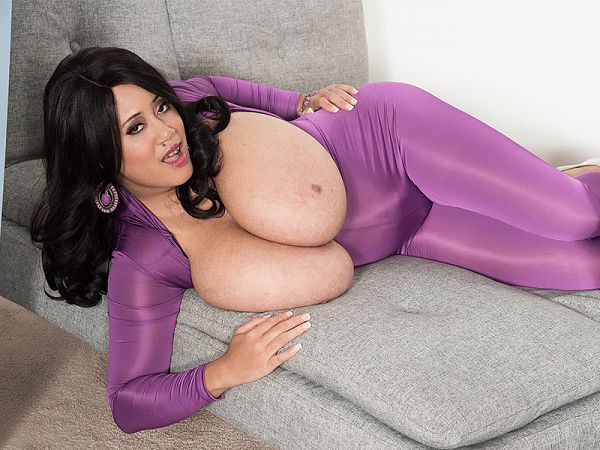 One of Roxi's many admirers once made a curious comment about her. The guy's name is Detmar, and he said, "I hope she'll run for president in Holland soon."

Odd. Roxi is a United States citizen. I'm not sure what Holland has to do with her (although I've often said, "'Dam, she has a great pair of tits!") I don't think Roxi has any intention of running for president anywhere. She's very soft-spoken. She's not a bullshitter, as most politicians are. Now, granted, she wouldn't have to say a word to get at least half the population to vote for her. All she would have to do is whip out her tits. But I think she can serve mankind better in her current position as a big-tit model.

In this scene, Roxi is wearing a purple bodysuit that hugs her curves. Her enormous KK-cup naturals come out quickly, and the show is on. Pussy is part of the show.

"Roxi beautifully shows that bigger really is better," wrote P.S. "The sheer size, shape and fullness of her heavy hangers is awesome. Roxi has it all: the looks, the body and the rack."

Yeah, it might've been that.