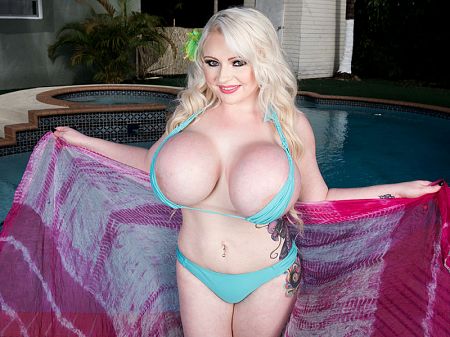 Webcam girl Princess Pumpkins is exactly the kind of big-bust star that dominated during the late 1980s and '90s. Had she been active 30 years ago, Princess would have been on every radio and TV talk show, had a cover on every big-boob magazine and stripped on-stage at clubs around the USA and Canada. She would have gone on the Boob Cruises. Her name stirs memories of the names the girls used back in the day: Busty Dusty, Candy Cantaloupes and Lisa Chest.

"I'm a little bit of a dom when I do my cam stuff, so Princess kind of fits for worship, and Pumpkins because my boobs are about the size of pumpkins. Thirty-two T, I believe. It's hard with USA sizes," Princess, the girl with the golden fleece, explained.

The domination that Princess mentioned is something some of the girls did on-stage in the 1990s. I was pulled on-stage once by Summer Cummings, who had me play horse to her cowgirl. She rode my back at a club called Wild J's in Las Vegas. On a webcam, it's totally different: a psychological experience, not physical.

"I actually get a lot of businessmen, and they love being dominated by a younger girl," Princess said. "It just works for me. Some like being called loser and for me to make fun of their small penises, telling them to pay me more money because I deserve it. Those guys want to hear me say things like, 'Your wife doesn't need Valentine's Day gifts. I deserve gifts more than she does. I'm hotter than your wife. I'm better than your wife. I'll always be better.'"