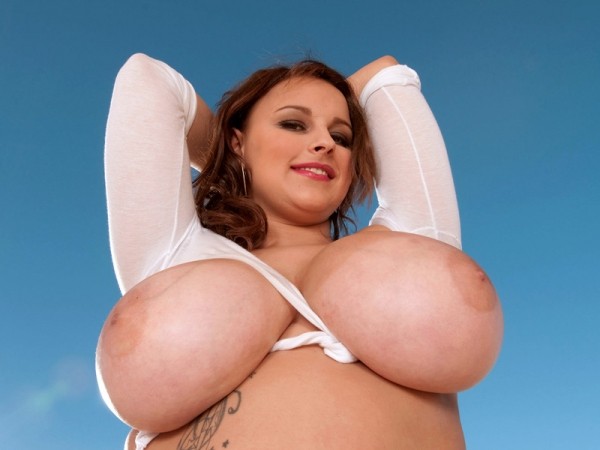 Not too many girls have been on the cover of SCORE, Voluptuous and XL Girls magazines. I guess it would seem to be impossible--how can a girl be slim 'n' stacked and super-plump at the same time?--but Terri Jane pulled it off, appearing on the covers of the September '11 V-mag, the November '11 SCORE and the May '12 XL Girls #227. I guess part of that is because, in all honesty, we wanted to make sure all big-boob lovers got to see her. A girl like Terri is not meant to be hidden or seen by a select few.

Terri Jane came to us in early 2011 for the Big-Tit Skinny Dip project, then we flew her to Montego Bay, Jamaica for Montego Babes with Micky Bells and Gya Roberts. What a lineup! She was a British girl--no surprise there--who brought her high-powered sexuality and bombshell body to the Tropics and was eager to show it off.

I guess, like so many British girls, Terri projects that girl-next-door, come-up-and-feel-me personality that has made so many of them, like Linsey, Lorna Morgan, Kerry Marie and Nicole Peters so popular. Terri is one of those girls who's always smiling, whether it's first thing in the morning after she just woke up or the middle of a sparkling, sunny afternoon in Jamaica.

"I'm hot and I'm freaky," Terri told us. "I like to get my freak on." But when we asked her to tell us the freakiest thing she's ever done, Terri suddenly turned shy. British girls can be that way.

This scene was shot in the Dominican Republic. Terri starts out in a very sheer, very skimpy top, but before long, it comes off along with the rest of her clothes. She speaks in that sexy British accent of hers, and at times in the video, we get great looking-up shots at her giant, K-cup naturals.

"Guys tell me that I am so amazing, that they love my curves," Terri said. "Because I always wear things that show off my curves. I never wear anything baggy."

Doing so would be a crime.