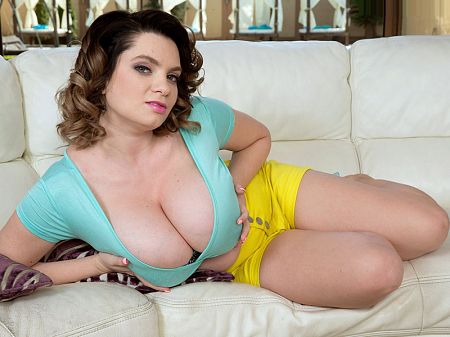 2017 was the year the Romanians began to take the big-boob spotlight. Kitty Cute was part of this Romanian wave. Kitty debuted in the November 2017 Voluptuous. She had never been professionally photographed, like many webcam girls.

"When I was offered a chance to pose, I was happy to accept," Kitty said. "I feel I am in very good company with so many beautiful girls of all nationalities."

Kitty became popular very quickly, so popular that she was invited to join the group shoot On Location North Coast with seven other bikini-top rippers. Not counting the Boob Cruises (1994-2000), this shoot was the biggest On Location event of them all.

"In my neighborhood, I was the girl who got a lot of guys asking me out and wanting to do things for me," Kitty said. "As I got older, I learned that I had more power than other girls. That made them jealous of me. That is how girls can be and I have no control of that. I am what nature gave me and I like it."

Kitty has a bush garden in this scene. During the North Coast week, Kitty sported a baldie.

Register your 100% Free ImLive account today and enjoy the hottest girls and couples live on cam! No Credit Card required! No restrictions or limitations! Unlimited access to all chatrooms!