Whip it for Juliana Simms

Whip it for Juliana Simms 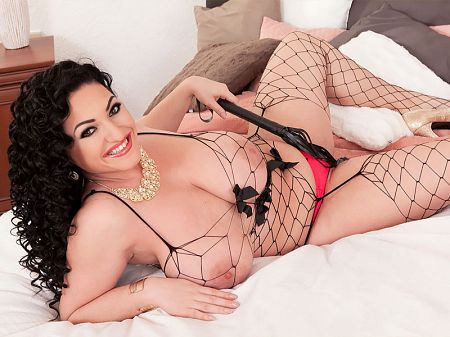 Whatever your feelings about S&M and B&D, body-beautiful Juliana Simms playing a domina with a cat o' nine tails might get you pitching a tent. I've never been a fan of S&M and B&D scenes and costuming, but for Juliana in this video, I made an exception. A reader saw Juliana and told her about The SCORE Group. Fortunately for us, she was interested, and what's also fortunate is that Juliana hasn't modeled elsewhere.

Juliana's sexy face, voluptuous rack and huge, natural breasts drive us crazy. She's definitely playing against type in this scene because as I once wrote, "Juliana might be the nicest fetish mistress you'd ever meet if you were into meeting fetish mistresses. She wouldn't whip you until you screamed in pain. She'd just tickle you with her whip until you laughed so hard you couldn't breathe, and then she'd ask you if you were okay."

Juliana is a man's woman. She doesn't care about fetish behavior or kinky business.