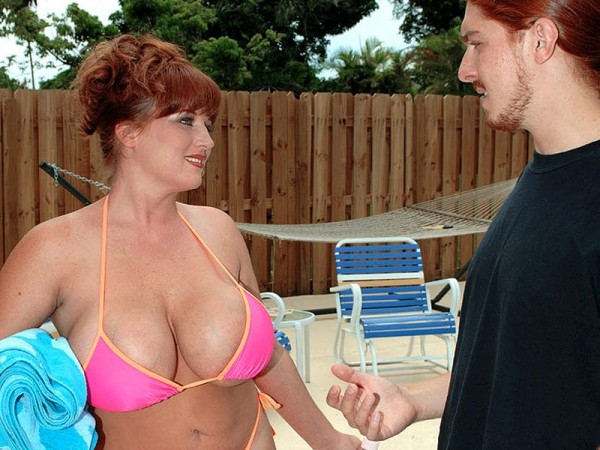 This is the opener of the SCORE video "Brandy Dean's Busty 'N' Wet."

"Someone's at the door. Red opens it. Who is it but Brandy Dean. All 40-25-36 inches of her. Miss Dean's 38DDDs enter the house before she does. So what's the deal? Brandy is a friend of Red's wife and was expecting to hang out with her at their pool. She asks Red if she can catch some solar rays by herself. If that's cool with him. Red would have to be the biggest idiot in the city to tell her to leave and come back when his wife returns."

That's quite an opener. It's yet to happen to me personally but you must keep the faith anyway.

Brandy peels off to a teeny-tiny bikini and it isn't long before Red is pouring suntan oil on her as a prelude to poolside sex with the mid-western tit-princess.

"Even people who know me can't believe it sometimes," Brandy told us. "Usually they just look at me very stunned. Most people don't know what to say, or they'll say, 'I never would have guessed that.' Men are thinking totally different than we are usually, but if we really think about it, we're all thinking the same thing, but we react different. Women usually aren't as bold as guys are."

Brandy and SCORE go back a ways. Her first pictorial was in Holiday '01 SCORE but before that, her first photos were published in October '99 Naughty Neighbors when she was new to modeling. Brandy was discovered and photographed by Kayla Kleevage, a legendary SCORE Girl who knows talent when she licks it.

Brandy never had the urge to move to Los Angeles or Las Vegas where most of the action is. She is basically a small town girl with a big city titty and figure, and that's how she likes it. She never seems to age either. "I'm from Ohio. I like it there. It's great. I have friends and family there, and I can travel wherever I like, so I stayed."

Register your 100% Free NudeChat4Free account today and enjoy the hottest girls and couples live on cam! No Credit Card required! No restrictions or limitations! Unlimited access to all chatrooms!