The dirty blonde from South Bend 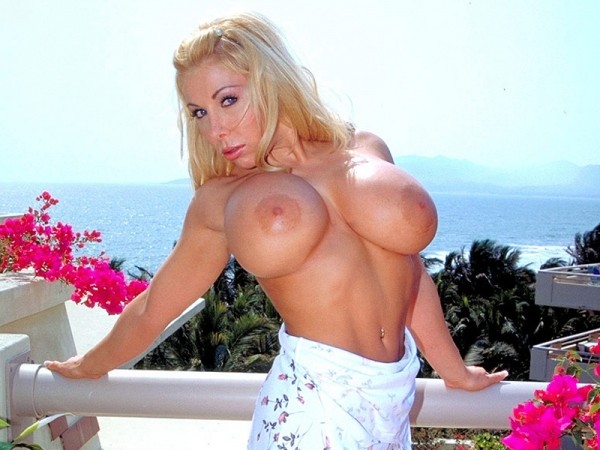 Lovette is forgotten today by most big-tit fans. Why that's so I can't explain. We continue to get letters about Lisa Lipps, Wendy Whoppers, Donita Dunes, Busty Dusty and many other iconic or well-remembered SCORE Girls. Lovette impressed me just as much as they did and still do.

Then l saw her again at the giant Las Vegas Consumer Electronics Show in 1998, sporting massive tits! That froze me in my tracks, of course. I never would have predicted this change. I let the management at SCORE know about Lovette's transformation, and they photographed her. I think her first SCORE shoot was a take-off on I Dream Of Jeannie. In that genie costume, she had a pretty strong resemblance to Barbara Eden.

Measuring 44-25-35 (and only 5'2"), Lovette appeared in SCORE several times beginning in '98. We invited her to Boob Cruise 2000, but she couldn't go because of her schedule. At the time, Lovette had moved into feature dancing at clubs and even danced at the famous London clubs For Your Eyes Only and Abbey Road. After the Cruise, a trip to Puerto Vallarta, Mexico in August 2000 was planned and Lovette was invited. This time, she could come along. This video is from that trip.

"I felt like I was teasing Peter the photographer," Lovette said. "I was trying to turn him on." Lovette was noisy and talked dirty in the video. "That's what guys want to jerk off to. I had a lot of fun doing that video. We stayed at a beautiful hotel in Puerto Vallarta. Good food, good people, good everything. There wasn't one bad thing about that trip."

Lovette was the covergirl of November 2000 SCORE. One of the photo shoots from Mexico was published in that issue.

"There was a little portion of time when I lived in Los Angeles when porn did become a job. That's why I left Los Angeles and went back home to Indiana. In 1996, I did a movie every day, sometimes even two movies in a day. That just got to be assembly line work. I was living in L.A. and I was doing movies for a living and just pumping the stuff out. Because that's what they tend to do to new girls, get you out there and just use you up. So the best thing for me was to just stay away and take L.A. in small doses."

Lovette's feelings about wild sex hadn't changed after moving back to the mid-west.

"I want people to use my ass. Use me, abuse me! I'm serious. I like being used and abused in a safe environment, and I like abusing, too. I can't really say that I like normal people sex, and by normal people sex I mean lovey dovey kissy poo."

During the mid-2000s, Lovette began to get seriously inked all over her body, and as the decade went on, she began to scale back on her career. By 2008, Lovette had announced her retirement and shut down her website. That was it. I don't know what she's doing today. Knowing how motivated Lovette always was, I imagine she's doing well in whatever new path she's taken.

See More of Lovette at SCORELAND2.COM!