Kelly Christiansen – Shy? You’re telling me this girl is shy?

Shy? You’re telling me this girl is shy?

People sometimes say to me, “Dave, do you ever get jealous that the girls are fucking some stud they barely know and not you?” Usually, my answer would be, “No. It’s part of the job, and at least I get to meet these girls and see them naked in-person.” But with Kelly Christiansen, my answer would be, “Sometimes. Yeah. A little. Maybe a lot.”

Kelly is blonde. She’s a bombshell. She has great tits. And she has the kind of personality that makes you want to bring her home to meet the parents…and then fuck her brains out. Not in front of the parents, of course. Later. Maybe in the car.

“My friends always say I’m very down-to-Earth and more like the girl next door,” Kelly told me. “Being here and doing this would probably surprise them. Going by how I dress and things like that, no, they probably would not be surprised. But, by my personality, maybe a little.”

“I’m definitely not as shy as I used to be,” she said. “That’s definitely a good thing for me. My husband likes watching me with other guys and he likes the idea that his wife is a star.”

I’m glad he likes watching her with other guys. I do, too. But you know what? While this scene was being filmed, I kinda had the urge to run into the studio, knock Shaggy (he’s the stud) over the head and take his place. But that would’ve been unprofessional. So I waited until the scene showed up on SCOREVideos.com and jacked instead.

Who's got the wettest and meatiest pussy? Join XLGirls.com today and decide for yourself. 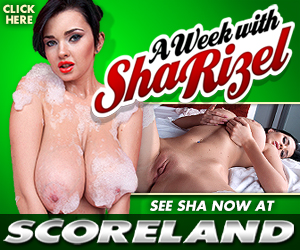