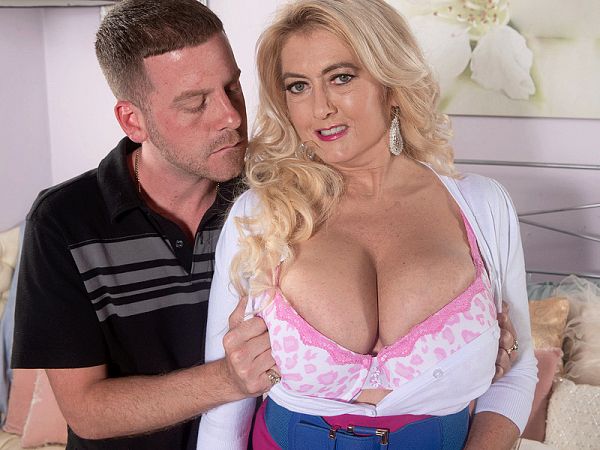 Tahnee Taylor, a 49-year-old, big-titted divorcee from San Diego, California, is one of the rare mature ladies we've photographed who has also appeared in Voluptuous magazine. That's because busty MILFs usually have fake tits. Not Tahnee, who's stacked and 100% natural. Her tits are DDD-cups, although they look larger.

Now that's saying something: a woman has DDD-cups but they look larger.

"I don't always dress to show off my chest, but when I do, I get a lot of attention," said Tahnee.

We asked Tahnee how often she has sex and she said, "At least two times a day."

We also asked her the best way for a guy to get on her good side.

"I once had sex next to the train tracks in Orange County, California, on top of this guy's Camaro," she said. "When the train came by...talk about an orgasm!"

The funniest pickup line Tahnee's ever heard was, "Hi, I'm an astronaut, and my next mission is to explore Uranus."

You can see a stud doing that at 40SomethingMag.com.